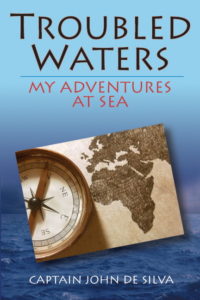 From collision to mutiny and murder, Marine Captain John De Silva’s TROUBLED WATERS sets down with searing honesty the highs and lows of the professional seafarer’s life. The land is but a temporary haven in which relationships are made, but the blue sea is where unforgettable events occur and memories are relived. This captivating memoir explores the sheer optimism we human beings have been endowed with to meet the adversities of life head on.

From plagues of cockroaches, engine failures, duplicity and deceit, to Reema, the Indian girl who gets pregnant and is subsequently abandoned by her Muslim boyfriend and forced into a lifetime of prostitution, the book explores human life and our relationship with the divine that allows us to steer a steady course through chaos as we head toward a peaceful anchor.

This is the story of a voyage that Captain John de Silva undertakes with all its attendant vicissitudes and death-defying miseries. Yet throughout he never loses his faith in the Lord; never loses that optimism we human beings have been endowed with to balance out fear and despair.

Captain De Silva’s odyssey begins in January, 2006, when he assumes command of the ship Cape Agulhas with its Myanmar crew. In his voyage around the coast of Africa, almost everything that can go wrong does. From a seasick cook who can’t cook, officials who demand bribes at every port, and a silent but very unpredictable and dangerous crew who never obey an order without first having a lengthy conclave among themselves, the Captain faces one test after another–trusting in his faith in God to find his way through.

If you’re wondering what a lifetime at sea might be like, you won’t want to miss this book.